Postmodern Jukebox’s “All About That Bass”: A Drummer’s Perspective – By Dave Tedeschi

Back to all posts >
By Dave Tedeschi
Nearly two years ago, Scott Bradlee called me to play drums on a Postmodern Jukebox video, featuring an incredible singer / upright bassist named Kate Davis. On a hot summer morning in Brooklyn, I loaded up my car and drove to Queens. Scott helped me carry my drums into his apartment where we quickly talked through the arrangement of “All About That Bass.” Then we pressed ‘record,’ and if you’re a PMJ fan, you know what happened next…

Download / Order “All About That Bass” from our ‘Historical Misappropriation’ album:

As a result of Scott's artistic vision and the collective of musicians he has assembled, I have had the opportunity to travel the world with Postmodern Jukebox and the pleasure of meeting and giving lessons to many inspiring drummers. A vast majority of these percussionists ask what kind of groove I'm playing at the beginning of the "All About That Bass" video. Although I don't know the specific name of it -- or if it even has one! -- the short answer is notated below. The more instructive answer takes us through some of the storied history of music in New Orleans and includes many of the pioneers of modern drumming. 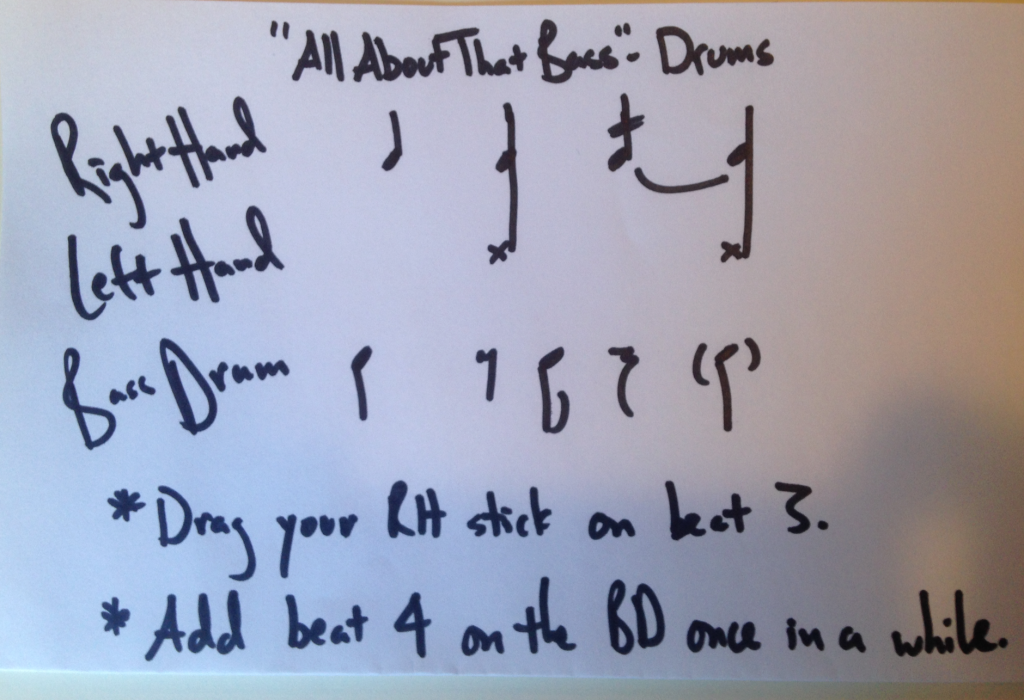 New Orleans was -- and indeed remains -- an incubator for many of the most talented musicians in the United States. A few of my personal favorites include King Oliver, Louis Armstrong, Jelly Roll Morton, Sidney Bechet, Mahalia Jackson, Professor Longhair, Dr. John and Allen Toussaint. Each of these artists has shaped American music in their own distinct way, and you can be certain that your favorite music can be traced back to their considerable influence.
Along with the singers and instrumentalists mentioned above, New Orleans boasts a long list of some of the most important drummers in musical history. Warren "Baby" Dodds is the father of modern drumming and is largely responsible for the drum set as we know it today. His playing is well-documented on recordings alongside Jelly Roll Morton and in Louis Armstrong's Hot Five and Hot Seven groups.  With respect to all those who have come out of New Orleans (I am, without a doubt, going to omit someone) the drummers that influenced me the most include Johnny Vidacovich, Vernell Fournier, Joseph "Zigaboo" Modeliste, Herlin Riley, and Stanton Moore.
When I was a student at the Eastman School of Music, my drum set teacher, Rich Thompson, had me check out a song performed by Wynton Marsalis and his father Ellis Marsalis called, "In the Court of King Oliver." Herlin Riley is on the drums and it was on this track that I first discovered the pattern I played on "All About That Bass."
You will hear the groove clearly at about the 0:13 mark. Notice how the hands are mostly playing down beats and the bass drum is kicking the up beat on the & of two. This marriage of up beats and down beats produces the infectious feel of the groove. You can trace these same rhythms further back to the clave and the influence that Afro-Cuban rhythms have had on American music.
For the drummers out there who are just getting started, I would download "In the Court of King Oliver", throw on a pair of headphones and play along with the track.  A common mistake of anyone trying to do something new is doing everything at once.  In this case, I would first work with your hands.  With your left hand (or right hand if you are left dominant) do a rim click on beats two and four and with your opposite hand tap on all four beats.  Once you get that down, try letting your stick bounce on beat three.  I would then focus on your feet and the pattern that is written out on the transcription.  Once both your feet and hands are feeling good independently of each other, start to incorporate everything together.  Remember to be patient and kind to yourself.  I always encourage my students to celebrate and not become frustrated when something is hard.  A challenging moment is proof that you are about to open a door in your world that was once closed and, in most cases, once you open that door it will remain open for the rest of your life!
Postmodern Jukebox has given me a platform to celebrate the rich history of music in New Orleans and the considerable role of its drummers. There is a lot to discover when it comes to this music, but the musicians listed above are a perfect place to start.  If you come out to a show in Europe this Spring, please introduce yourself and let me know what you found in your explorations of New Orleans music.
---
Dave Tedeschi is endorsed by C&C Drum Company and Vater Drumsticks and lives in Brooklyn, New York. Dave will be giving private lessons while on the road and is always happy to hear from you. Find him on Facebook and Instagram @davetedeschi.