I’ve gotten asked for my opinions about the industry-wide move from music downloads to music streaming quite a bit, so I figured I’d share my thoughts on this matter.  First things first, however, I want to let you know that I’ve created a special “8 Hours of Postmodern Jukebox” Spotify playlist, which you can use to help you get through the workday / school day / wedding reception / PMJ and Chill / whatever.  Click here to follow this playlist and make every situation instantly more vintage. 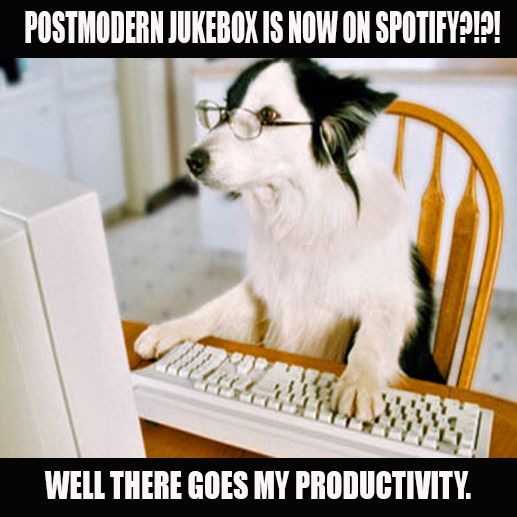 Now, for my thoughts on the streaming revolution – if you just wanted to find a PMJ playlist on Spotify, don’t read past that meme with the dog wearing glasses; the following is aimed mostly at indie artists.

Yes, streaming typically pays out low royalties to artists compared to digital downloads, which in turn pay out lower royalties than physical CD sales.  So, to many artists that rely on music sales to stay afloat, streaming has been the biggest blow to artists since reality TV contracts (just had a moral obligation to slip that in).  Yes, you need about 140 streams of a song to get paid equal to just one digital download from iTunes, and that’s assuming you own 100% of the masters.  It’s not a great deal for artists by any stretch of the imagination.  But, the genie is out of the bottle, and streaming is the way many people prefer to listen to music.

The reality is that every time a new technological advance comes along that threatens an existing business model, it inspires a lot of valiant protest efforts before eventually becoming so commonplace that everyone accepts it without a second thought (a good illustration of this: this archived website from 1999 that hoped to start a petition against making calls over the internet, arguing that it gives an unfair advantage to rich  computer owners.  A bit of cruel irony that the URL they used was ultimately purchased by Apple).  Streaming is simply not going to be stopped, because it’s a convenient way to listen to music and consumers like it.  I’m hopeful that the music industry finds a way to generate better streaming royalties for artists, but I have pretty low confidence in the music industry’s ability to negotiate anything.

So, in the end it falls on artists to do what we have always done and make lemonade out of lemons. Already, there have been some ingenious methods of covering the shortfall, such as one band’s silent album that was meant to be played on a looped as listeners slept.  Here’s some more realistic approaches to navigate the world of streaming as an artist, in an easily digestible and BuzzFeed-friendly list format:

Postmodern Jukebox has a video to go with every song we release.

I thought a lot about the long-term implications of streaming before deciding to put PMJ on Spotify and Tidal (full disclosure: I don’t really know anything about Tidal, so I haven’t made an 8 hour PMJ playlist there yet).  In the end, my goal is to get people to listen to PMJ and explore this universe of vintage styles and fantastic performers, even if they don’t have the means to download every single album or physical CD (shamelessly linking to both), so that perhaps someday, they can experience their first PMJ live show and see how inspiring a night of incredible live performances can be.  Every artist is different, so I respect that some artists would rather not make their music available for streaming at all.  I’m only saying that the trend is likely here to stay, and it doesn’t have to be the death of the music industry.

Leave me your thoughts in the comments!