How I Learned To Make Music – By Scott Bradlee

I was a terrible music student when I was a kid.

I started formal piano lessons at age 9, but my parents found out very quickly where piano fell on my list of priorities.  I didn’t practice, and responded to the corrective measure that my teacher introduced-a practice log, to be filled out each day- by filling it out with fictitious amounts on the car ride over to lessons.  My shrewd teacher saw through my ruse, but, to her credit, she never called me out directly as a liar.   Instead, she conveniently went on vacation and filled her schedule for the next semester before my mom could sign me up.  My piano career had seemingly ended at age 11, and I was overjoyed. 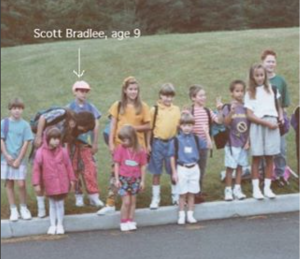 Me at the age that I took piano lessons. I was more interested in dressing like Sinbad back then.

It was that summer that I discovered George Gershwin’s “Rhapsody in Blue” and from there, the sound of jazz. This was the kind of piano playing that my adolescent self could relate to: loud, brash, and with plenty of contempt for rules. I could barely read music, but I became determined to learn how to play this style, no matter how many hours is took. My parents were confused.

Rhapsody In Blue was really hard.  It didn’t take me long to figure out that the sheet music was well beyond my skill level.  It seemed like some passages legitimately required a third hand (I later found out I had was actually a piano reduction, meaning that it wasn’t just the piano part of the orchestral score that I heard Leonard Bernstein play, but the entire score for all instruments just kind of mashed together into two staves). Undaunted by this, I tore into the score in the same way that I read books (or write blogs, for that matter) – I skipped around to the interesting parts first.

The “interesting” parts to me at this time were the jazz-influenced bits; the fast piano runs and chromatic passages, the majestic main theme, the slow blues riff that led to the American Airlines commercial part (sorry, Gershwin). These passages sounded like nothing I had ever heard before, and I began slowly picking them apart, trying to discover their inner workings. Before long, I began reading up on Gershwin’s non-classical influences, and decided that I needed to explore ragtime and honky tonk piano, reading about its history and practitioners. 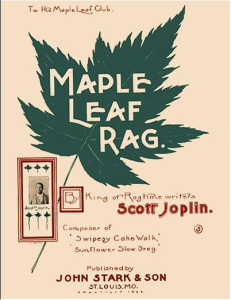 “Maple Leaf Rag,” the next piece that inspired me.

From there, I discovered stride piano and heard Fats Waller play A Handful Of Keys.  I couldn’t find any sheet music for it, but I was able to build upon what I had already learned about ragtime and picked out a good chunk of it by ear. I devoured books about early jazz and it’s key figures: Jelly Roll Morton, Louis Armstrong, Bix Beiderbecke.  I took out CDs and cassettes by the dozen from my local library, putting my headphones on and rewinding passages while I sat at the piano, trying to mimic them.  My repertoire grew: Black Bottom Stomp by Jelly Roll Morton, Black and Tan Fantasy by Duke Ellington, Ella Fitzgerald’s version of “How High The Moon.”  Hours flew by at the piano, sometimes just experimenting.   I was not yet in high school at this point, but I was already hooked.

If your dream is to become a musician, don't just learn to play an instrument or sing well.  Find what inspires you, and dive into it with a passion that screams, "This is all I want to do, every day."  Because that's what it takes.

[some passages from the above are reprinted from my piano course, "Ragtimify"]