If you’ve attended a Postmodern Jukebox show with Casey Abrams in the cast, you already know what a force of nature he is onstage.  He pours his soul into his singing every night.  He shreds the upright bass.  He occasionally does hilarious things onstage without anyone’s knowledge.  Most of America got to know him on the 10th season of American Idol, but since then, he’s grown into an artist unlike any other: a popular artist that maintains the spirit of improvisation in everything he does – both with Postmodern Jukebox, and as a solo artist. 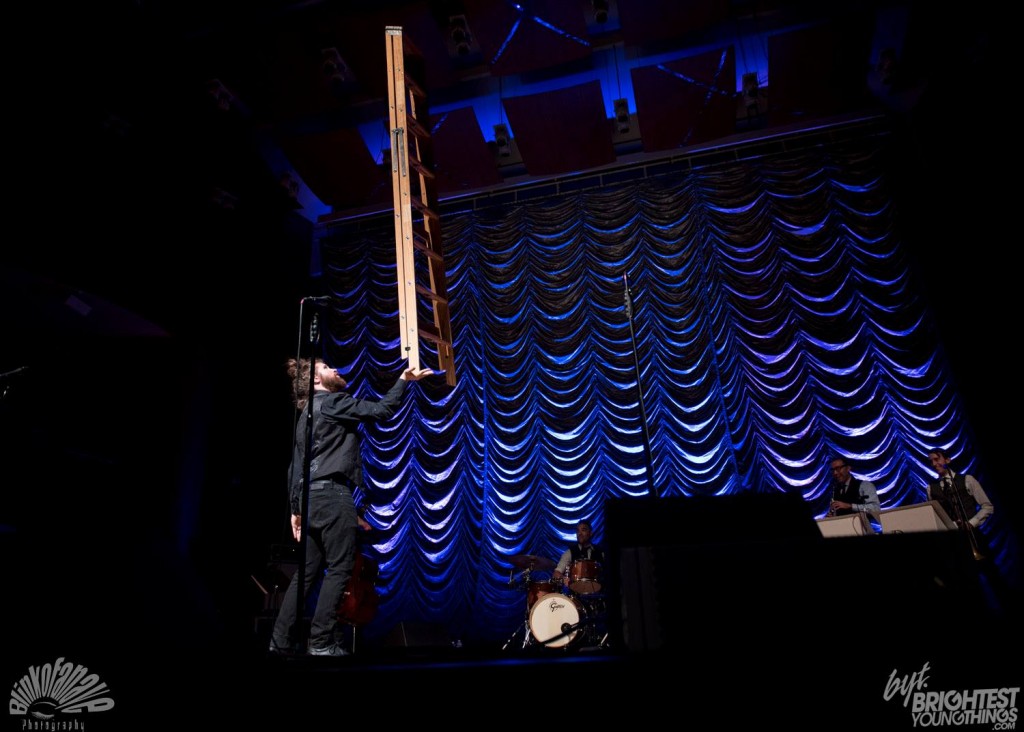 I met Casey shortly after moving to LA. PMJ saxophonist Jacob Scesney was a member of his band, and gave me his information, saying, “This guys is such a great fit for what you do.”  I shot him a text to invite him to come perform a song with us at our Wednesday night residency at one of West Hollywood’s hottest nightclubs. He accepted, and I arranged for him to come to our afternoon soundcheck a few hours before the show, so that we could work out a tune to play.  I wasn’t too familiar with his work at this point, but I was impressed by a YouTube clip I saw of him, where he demonstrated a soulful voice and great jazz bass skills.  In the clip, he had the clean cut look of a conservatory jazz major, so I assumed him to be an introverted, academic type.  I was quickly dispelled by that notion. 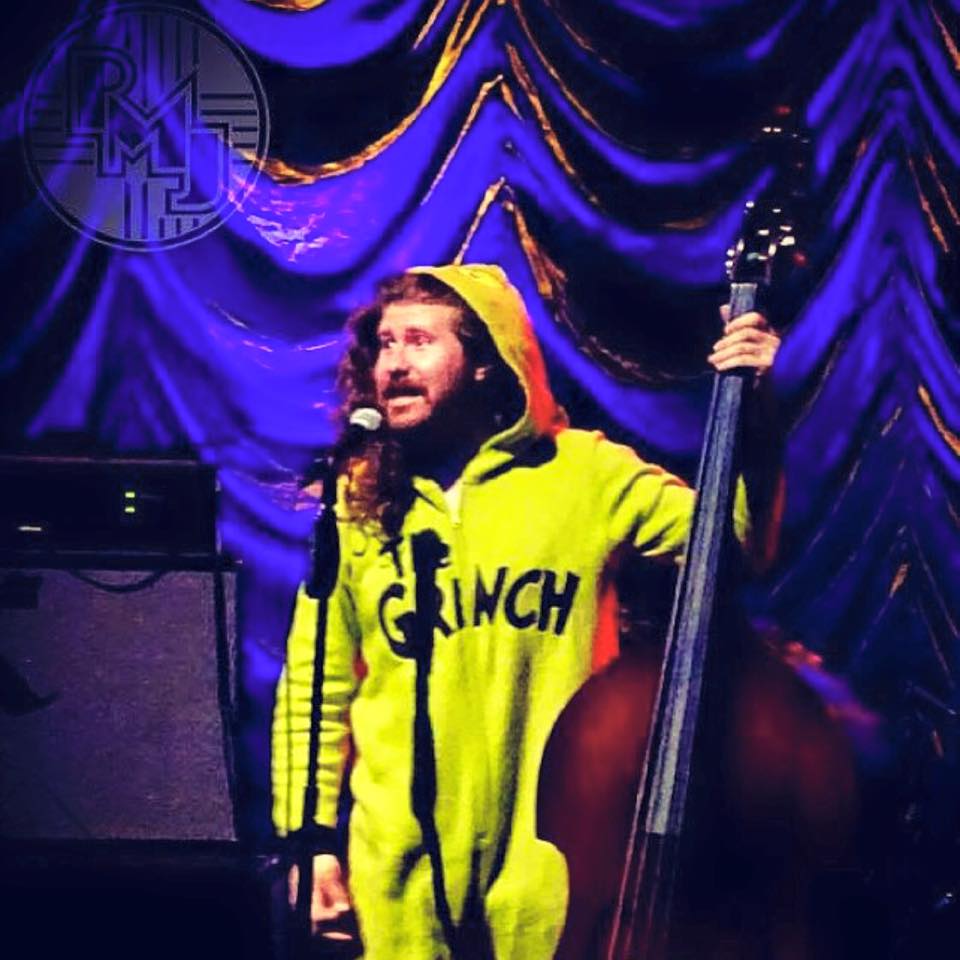 Upon his arrival to the club, one of the managers tried to get him to leave, assuming him to be a homeless man (this was a recurring theme for us; a different manager had done a similar thing after finding our stage manager Rook lying down in the parking lot, having just returned from an exhausting travel day).  He had long hair, a tye-dyed t-shirt that read, “TRIPPIN’,” and cargo shorts that he would later refer to as his “multi-purpose pants.” He gave me a big hug, and a “Hey dude! This place is sick!”  I knew we were in for a fun time. 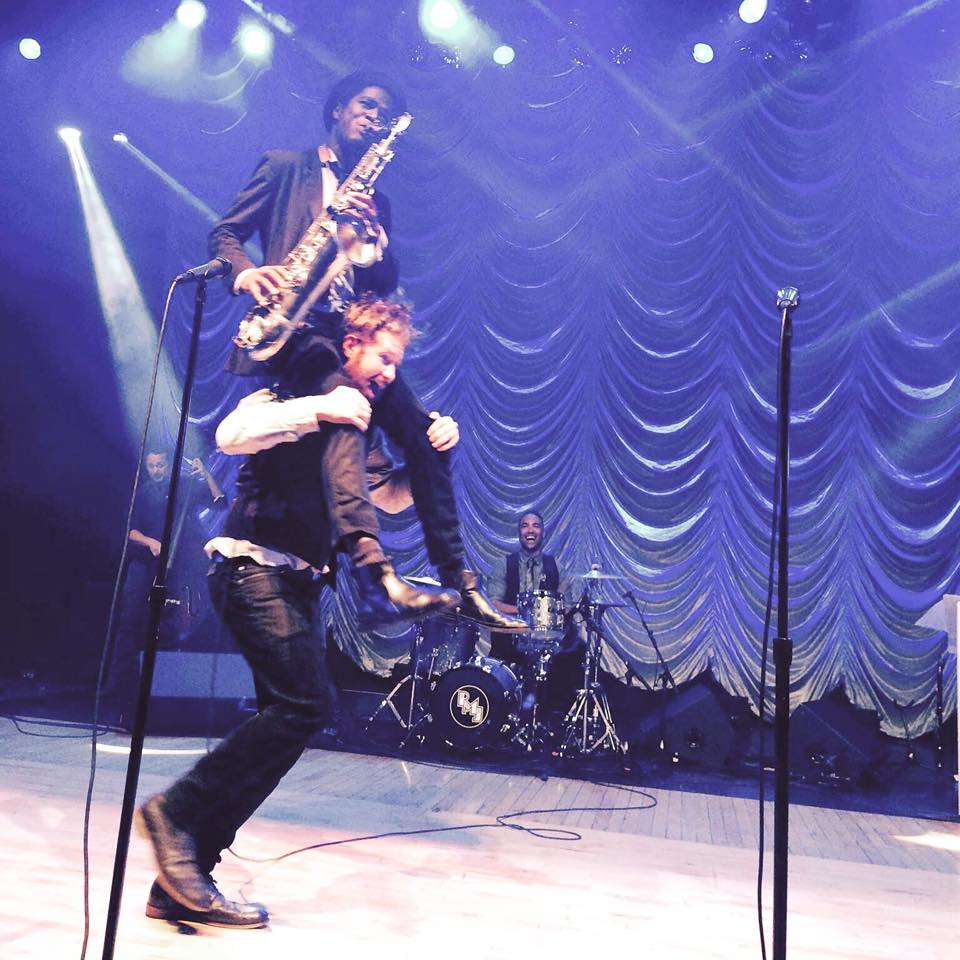 As much as Casey appeared to fit the “hippie” stereotype, he was absolutely on top of his game musically.  He had suggested that we try a New Orleans take on “I’m Not The Only One” by Sam Smith, and I began to try out a few ideas.  He caught every change I played almost instantly, in the way that only a true natural musician can do.  His voice was strong and gruff; he combined blues sensibilities with a bit of Jack Black-style theatrics for a completely unique style, and played the bass with such intensity that I half expected the strings to come off the fretboard.  It was clear that music was the most important thing in Casey’s life, and the enjoyment that he showed while playing was 100% genuine.

Download / Order”I’m Not The Only One” from our ‘Selfies on Kodachrome’ album:

We filmed that New Orleans-style arrangement of “I’m Not The Only One” a couple weeks later, and it fast became a staple of PMJ repertoire and an absolute crowd pleaser on tour.  The running gag was that Casey would trade a different item for Adam’s bass every night to start the song, the most memorable being a clump of his own hair, which he obtained after the girls in the cast straightened his hair in Prague.  After hysterically breaking character onstage, Adam went to throw away the clump of hair, before being informed by Haley Reinhart that Casey wanted to keep it.  This anecdote might just sum up the Casey Abrams experience best, but his stories from tour are plentiful.  It was not uncommon to walk outside after a PMJ show and find him jamming outside with local musicians in the parking lot, or drawing a crowd at a piano inside a restaurant.  His love of music is just inspirational. 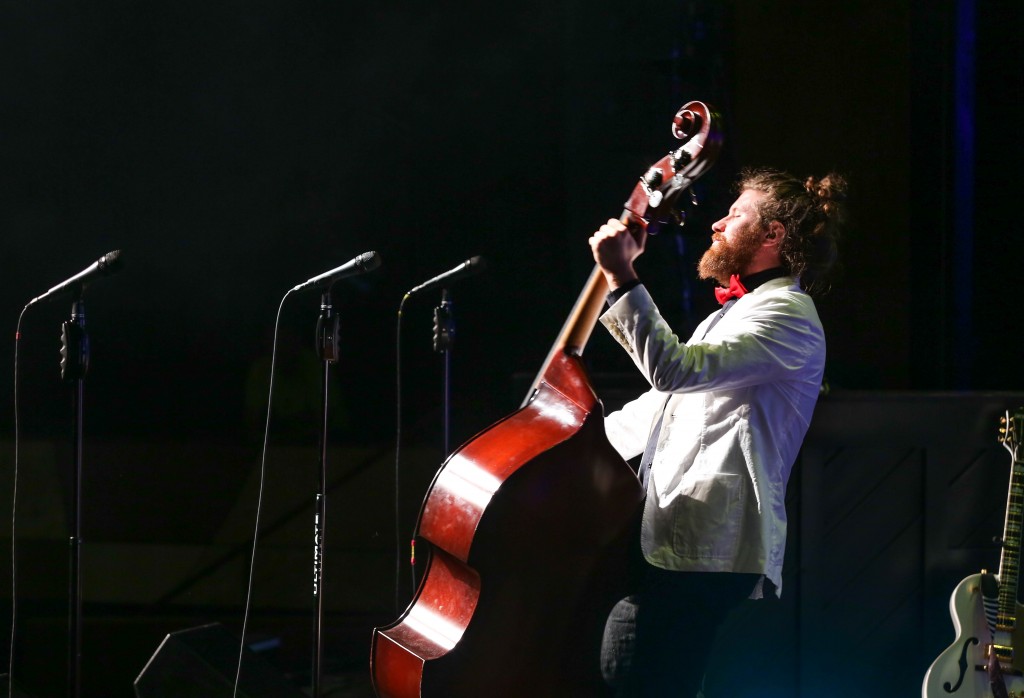 I figured I’d let Casey speak about himself in his own words – here’s an interview with him:

Q: What one song made you fall in love with music?
Casey: Bohemian Rhapsody by Queen. It combined awesome jazz and opera harmonies with a Rock & Roll beat.
Q: How does playing the bass help you as a singer and songwriter?
Casey:  It makes me come up with funkier lines as write. I love singing melody, but a lot what makes that melody good is a different, but complimentary harmony happening at the same time. The bass can be a harmonic and melodic instrument. So I’m basically doing a duet with my self.
Q: Who are your biggest influences as a musician?
Casey: Miles Davis- he was chilled out, made music the way he wanted to, and took a lot of artistic risks in his career.   Also, Jack Black, because he is a great actor, but can rock a stage with just his voice, and make a crowd go nuts. He’s also a good/funny scat singer.
Q: Who are your biggest non-musical influences?
Casey:  Bill Nye the Science Guy & Beavis and Butt head
Q: If you had to pick one song as your theme music in life, what would it be?
Casey: “Who Let the Dogs Out,” by Baha Men. Cranked to 10.
Q:  What was your favorite Postmodern Jukebox tour memory?
Casey:  I remember when we were in Scott Bradlee‘s home town, and all of the PMJ crew visited his parents at their house. Scott’s mom didn’t know we were coming, but still was nice enough to make us a quickie breakfast. Later that night, when “Stacy’s Mom” was coming up, we decided to change the song to “Scotty’s Mom” in honor of how nice she was that morning, since I knew Scott’s parents were in the audience. There were a lot of innuendos that I didn’t really think about singing until I sang them. So a couple times in the middle of the song, I had to break character and be like, “Scott’s Dad, I’m sooooo sorry!” And, we didn’t even tell Scott that we changed the lyrics, so the look on his face was brought me so much happiness.

Download / Order “Stacy’s Mom” from our ‘Selfies on Kodachrome’ album:

–
Q: You had a painting that you were carrying around for much of the last European tour that you were very determined to take home with you.  Did it ever make it home?
Casey: Ahhhh, no, Haley and I got the painting on tour, we were debating who was going to get it, but it’s still at our mutual friend’s house in England. I’m going to hit him up right now. It had a silhouette of naked lady I believe.
Q:  What’s the secret to maintaining a long, luxurious head of hair?
Casey:   It’s 50% combing it and shampooing every couple days, and 50% talking to it, and saying nice things about it.
Q: If you could only use one utensil for your entire life, which would you pick?
Casey:  Finger-nail Scissors, for such a direct name.   They’ve got a wide variety of uses.
Q:  Some would say that your multi-purpose clothing has revolutionized fashion.  How would you explain the concept of multi-purpose clothing?
Casey: Sometimes you’ve got to move fast on tour, that’s why I wear Multi-Purpose shorts. I wear them all hours of the day – sometimes even sometimes on stage. I don’t wear pajamas, and I don’t wear work out clothes… they are literally one in the same. How much time does that save me? You know?
Q:  You’re a people person. How do you like to connect with your fans?
Casey:  Velcro. Also through Youtube,Facebook,  and Instagram/Twitter/ Snapchat – I’m at @caseybassy on there.  Also, if you see me in the street during tour, give me a hug, I like those connections.
—-
Be sure to check Casey out on Patreon to learn more about his various creative projects.