A few months ago, I released the first collection of Postmodern Jukebox karaoke tracks, “So You Think You Can Sing?” and launched a #PMJsearch contest in which aspiring PMJ vocalists could send their own versions of our vintage remakes, with a winner selected to record a video with us. I expected a few entries, but nowhere near the hundreds upon hundreds of entries that poured in from all over the world.  Many extremely impressive singers entered, and it was exciting to see so much undiscovered talent and uniqueness in the world.  Here is the overall contest winner, Holly Campbell-Smith from Scotland, performing a swing version of Ed Sheeran’s “Thinking Out Loud” in her Postmodern Jukebox debut:

Download / Order “Thinking Out Loud” from our ‘PMJ and Chill’ album:

"Thinking Out Loud" has a special significance to Holly: it was her wedding song.  When I found this out, I imagined turning it into something more upbeat and swinging - something that captured the excitement of new love.  Holly's natural vocal tone and honest (yet pitch perfect) delivery was a perfect fit for this arrangement, which also featured a burning sax solo by Jacob Scesney.  Even more impressive: she turned in this performance the day after a twenty hour flight from Scotland to LA. 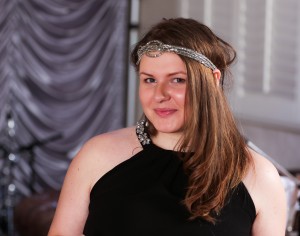 Holly's #PMJsearch entry was set to our cabaret remake of Taylor Swift's "Blank Space," and it immediately stood out to me. For one thing, she recorded it in her kitchen, which I can certainly relate to, as the vast majority of PMJ videos were filmed in my living room, even when they probably shouldn't have been.  When she started singing, I was struck by how natural she sounded; listen to Holly and you can't help but believe all the words that she is singing.  She had a certain uniqueness in style that embodied much of what I set out to create with Postmodern Jukebox.

The #PMJsearch competition went a long way in proving that Postmodern Jukebox isn't contained to one geographical region; it is truly global.  I was so inspired to see so many incredible performers from around the world performing my arrangements, and am excited to find new ways to get them involved.  We've already got a three month tour of Europe planned in early 2016 (get tix by clicking here), and believe me when I say that we're only getting started.