As you may already know, this website is the new home of Postmodern Jukebox, and new videos will be premiering here on Thursdays before getting released to YouTube on Fridays.  Tomorrow, we’re excited to introduce you to another amazing young singer that is destined to do big things in music: Rayvon Owen.

You might have seen Rayvon on the last season of “American Idol,” if you’re into that sort of thing.  Rayvon has a powerful, soulful baritone voice, the kind that compels you listen from the moment he begins singing.  Most importantly, he really FEELS the music.  You can tell that there’s nothing else he’d rather be doing than being on stage. 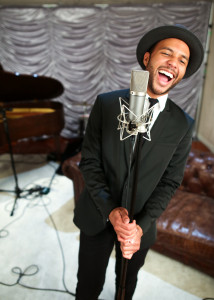 When choosing a song to remake PMJ style with Rayvon, we decided on a song that was a huge hit when he was growing up, and flipped it in a way that hasn’t been done before.  I’m really excited about the arrangement of this one, and Rayvon’s interpretation of it was perfect.

Why are we holding our car keys?? Find out tomorrow.

Check this site at 8 am PST / 11 am EST tomorrow to see the world premiere.  You’ll be able to find it on our iTunes store, as well.